Pilpintuwasi is located in the Amazon rainforest in Peru and works in rescue, rehabilitation, and when possible reintegration of wildlife.

We work in partnership with Animal Defenders International (ADI) and the ecological police in the fight against the trafficking, abuse, capture, and hunting of wild animals. Volunteers can help with caring for the animals, maintenance, and environmental education.

Gudrun Sperrer started working on discovering host plants for butterflies in 1995. In 2002, she founded a butterfly farm with the idea of conserving some of the thousands of Amazonian species. Over the years we started protecting the wildlife of the Amazon region through rescue and rehabilitation of local flora and fauna.

The animals at the center have all been abused, neglected, or abandoned. Some of the animals were orphaned, others were rescued from animal dealers who were trying to traffic the animals out of the country and many have been retrieved from families who had kept them in captivity. The majority have suffered some sort of physical or psychological abuse.

We currently have more than 20 different species of animals at the center which include: Jaguar, ocelot, tapir, parrots, macaws, monkeys, butterflies, and many more. 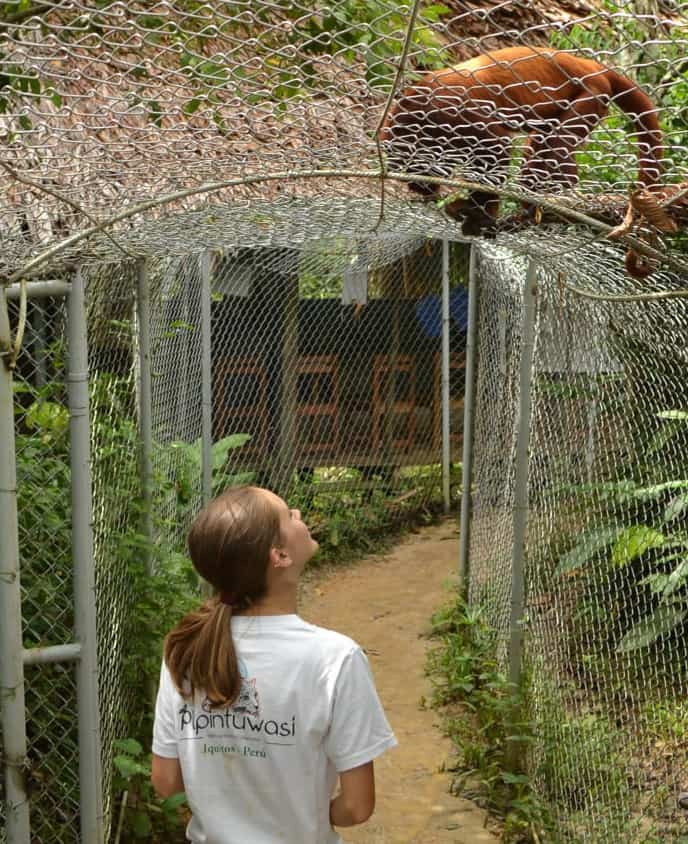 Anguila Lodge is a jungle accommodation in the Amazon Rainforest. It is the ideal place to relax and disconnect.
It is located 30 min walking from Pilpintuwasi or 15 min walking from the port in Padre Cocha village.

Padre Cocha is a small but busy village with small roads, no cars, just moto-taxis which is a vast contrast from Iquitos.
However, you can still reach the city within 20 minutes by boat and go there for an evening if you need to. In Padre Cocha, you will find many small shops where you can buy all your basic products like toiletries, some produce like bread, chicken, fish, vegetables, eggs, etc and sometimes there is a small market.

There are also a couple of Chifa and fast-food restaurants where you can find chicken, fish, and some vegetarian options.

Volunteers are also welcome to cook their own food at Anguila Lodge. The shared kitchen is equipped with a mixer, a rice cooker, a fridge, pots, pans, cutlery, plates, and everything to prepare a full meal.
You are also free to grab some fruits from the fruit trees.

The Anguila Lodge has several rustic bungalows with a capacity of 1-3 people. All rooms have a bed, a private bathroom, a table with chairs and 24 hours electricity and running water. 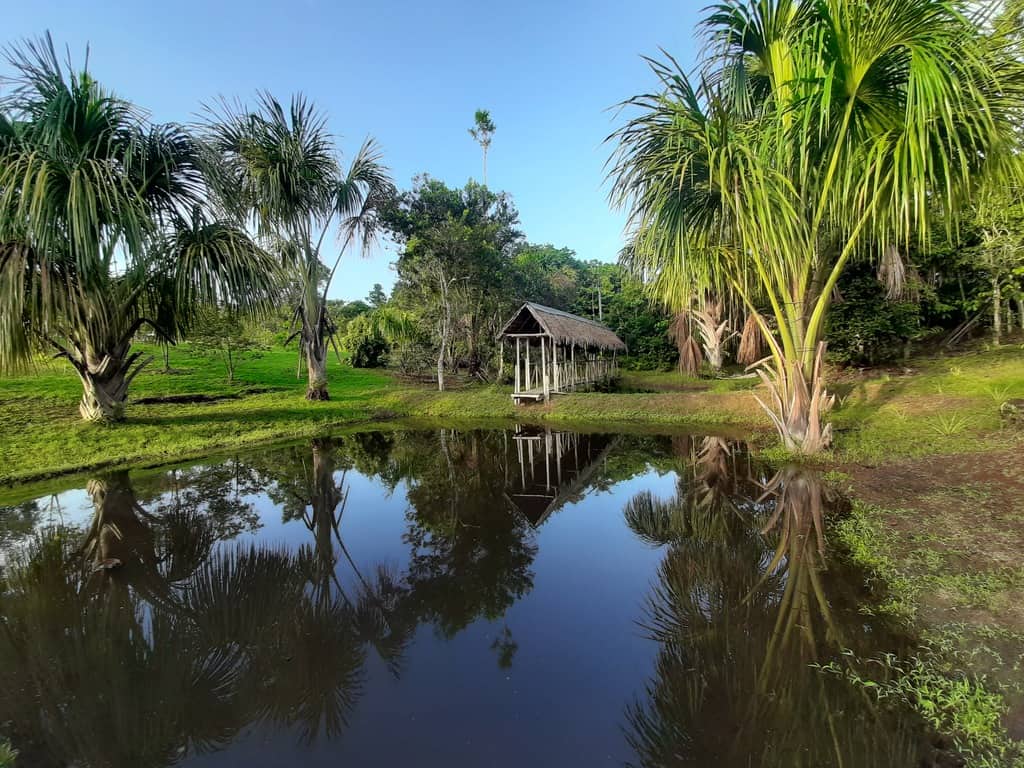 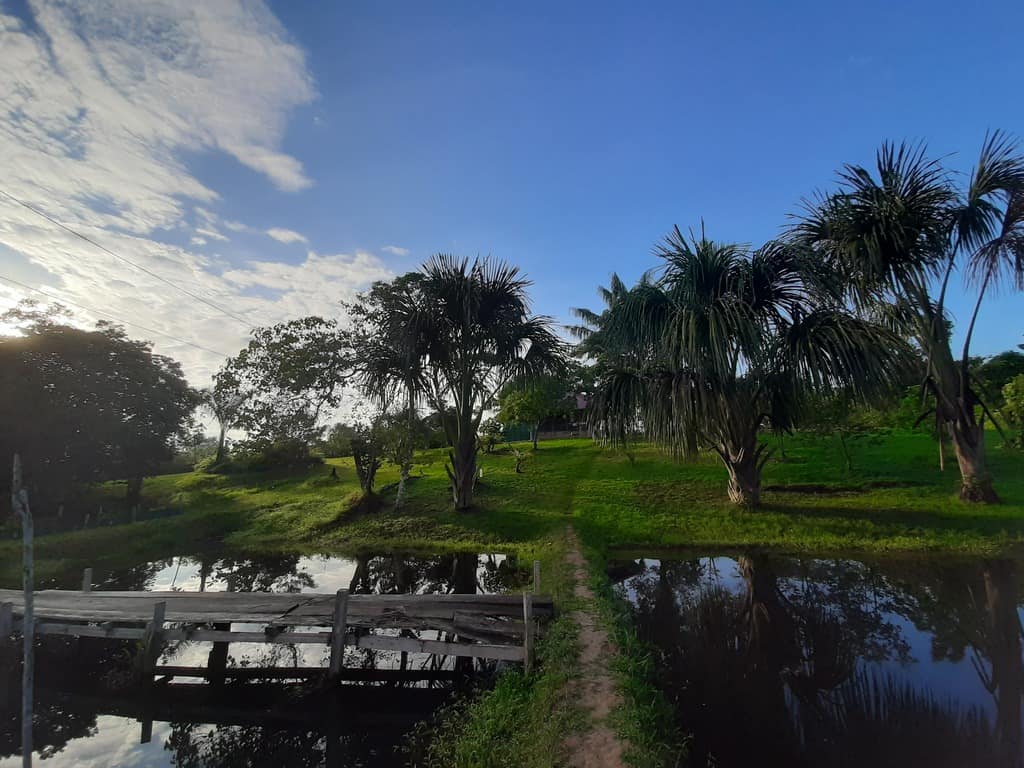 While the lodge is nicely renovated and all the rooms have some mosquito protection, you may encounter animals like insects, cane toads, short-tailed opossums, etc.

The bungalows are set on 3.5 hectares of beautiful gardens including a variety of different fruit trees and ponds. There’s also a hammock zone where you can chill.

During your stay at Anguila you can also explore the beautiful area where you can go canoeing, fishing, and observing the different species of Amazonian fish.

WHAT IS NOT INCLUDED?

How do I apply to be a volunteer?

If you would like to apply to join our volunteer project, all you need to do is complete our online application form. After we receive your application we will contact you and send you a detailed volunteer guide.

We hope to receive your application soon!

Do I need any experience to become a volunteer?

No, you don’t need any experience to volunteer here at Pilpintuwasi.
If you have any specific skills, please let us know and we’ll do our best to offer opportunities appropriate to your skills and interests.
We’d love to share knowledge and learn from each other.

Is there a minimum stay required?

Yes, the minimum stay is 4 weeks. We are happy if you want to stay longer.

Can I volunteer with my family or friends?

Yes, of course. We welcome all families and friends to our volunteer project and it can be an amazing way to share the experience!
Please note that we do not take any responsibility for minors.

Do I have to speak Spanish to volunteer?

Speaking Spanish is not a requirement for our volunteer program, but it is always useful to communicate with local people and it can make your stay here more enjoyable. Some of the workers and Gudrun speak English and German.

Which clothes and gear should I bring?

Your clothing should be lightweight, breathable, hand-washable, and quick-drying. To avoid mosquito bites it is better to wear long-sleeved shirts and light colors. If you want to bring insect repellant, please bring a natural one. In your daily activities, your shoes can get dirty or muddy and the streets can be uneven. We recommend you bring comfortable walking shoes. In the rainy season, rubber boots can be very useful, but you can also buy them in Iquitos. For the night you will need a flashlight (torch) or a headlamp as some of the streets and ways are without street lights.

Do I need a Visa to enter Peru?

Depending on where you are from you may or may not need a special visa to enter Peru. Most people, including those from the U.S., Canada, Australia, and Europe, automatically receive a 90-day tourist visa upon entering the country.

Do I need a travel insurance?

We recommend travel insurance for your volunteer trip.

What immunizations / vaccinations will I need?

We strongly recommend hepatitis A, hepatitis B, yellow fever, and rabies.

Is Peru a safe country?

Peru is a generally safe country, but please use your common sense and exercise caution especially at night, on transport, and at busy places. Pickpocketing and scamming are common in these areas. It is also a safe destination for female travelers, aside from the above risks to which both women and men are subjected.

The weather in Padre Cocha is hot and humid all year with an average temperature of 26-28°C and relatively high rainfall. From June – August you can experience a phenomenon known as “el friaje”. In these months the temperature can drop below 15°C (into the 50s Fahrenheit), so you should be prepared with a change of warm clothing.

Is the tap water safe to drink?

Tap water in Peru is NOT safe for drinking. Tap water can be purified by boiling it or adding purification tablets, such as Micropur, which can be purchased at most pharmacies. Generally speaking, bottled water is easy to buy in stores. We would also recommend bringing a filter bottle. There are different brands like Water To Go that purify tap water. Showering and brushing your teeth with tap water is rarely a problem.

Help us give the animals a second chance